Is your conscious mind getting in the way of your health, happiness and potential?

Previous Next
Is your conscious mind getting in the way of your health, happiness and potential?

In many cases, past experiences set our future behaviours and sets up limitations which effectively constrain our full potential.

Hypnotherapy, is commonly used to facilitate adjustment to set new behaviour, and helps free the shackles of behaviour patterns that previously were difficult to counter or overcome.

“It is genuinely exciting to know that Hypnotherapy can not only help individuals overcome poor habits but it can offer individuals exceptional change that optimises their performance potential” says Jane Johnson, Clinical Hypnotherapist.

Hypnotherapy can be genuinely life changing and liberating for people, many of whom had simply never heard of it, or passed it off without proper consideration”

One of Jane’s clients Tony Prado, a chronic smoker who had struggled with a long term smoking addiction talks about the benefits of a Hypnotherapy to his health and happiness

“To be honest, I doubted that Hypnotherapy would have any effect on me but was keen to get rid of my smoking habit and had tried Champaks , Cold Turkey and other methods to no avail. I was referred by a friend who had been to see Jane and was amazed at how easy it was .  After completing the program i was never inclined to even think about smoking again. After 30 years as a heavy smoker i am thrilled to have reclaimed my health and my life again. I look and feel younger happier and even less stressed. Thanks Jane I would refer you to anyone considering quitting. It was so easy.” Tony Prado

In a study conducted in 1992 the University of Iowa, Journal of Applied Psychology reported that:

“Hypnosis is the most effective way of giving up smoking, according to the largest ever scientific comparison of ways of breaking the habit. A meta-analysis, statistically combining results of more than 600 studies of 72,000 people from America and Europe to compare various methods of quitting. On average, hypnosis was over three times as effective as nicotine replacement methods and 15 times as effective as trying to quit alone”.

“It saddens me that fantastic results such as this continue to be enjoyed by so few people prepared to try what many have traditionally believed is no more than quackery” states Jane.

But Hypnotherapy offers a great deal more than just a therapy to help smoking addicts.

“It has been incredibly satisfying to enable and empower individuals with other behavioural issues, such as abusive tendencies, relationship problems, addictions, eating disorders and those with anxiety manifestations from negative thinking to low self esteem, and show people how Hypnotherapy offers real benefits for long term health, happiness and potential.” 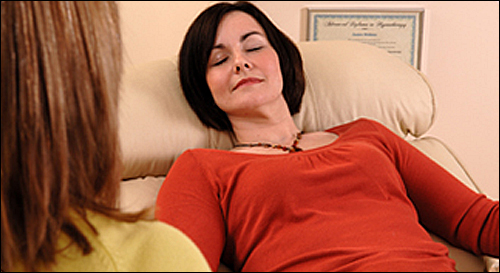 Hypnotherapy is excellent for birth preparation

“As a mother, one of the areas that I personally find most satisfying is to help expectant mothers prepare for a more enjoyable birthing experience.”

Hypnotherapy during childbirth is based on the theory that women experience an easier more comfortable birth, when unencumbered by fear, by reducing /eliminating the ill effects of the fear-tension-pain cycle during the birthing process.

Birthing women and their support partners are taught non-pharmacological strategies, such as breath work, relaxation, visualisation, and techniques to trigger endorphins.

“The breathing techniques and visualisation kept us reassuring and focusing on baby Sophie , rather than fear, pain or apprehension. Sophie’s delivery was an amazing experience.”  said Mari (another Hypnotherapy devotee) after her babies fast safe natural delivery , “During the labour my husband Ben, who attended the hypno birthing with me,  was able to remind  me the techniques and breathing.  It really helped us both . Naturally and fairly comfortably she arrived safely into our arms”.

In 1942, Childbirth without Fear was published; written by English obstetrician Grantly Dick-Read. The book introduced the idea of using hypnotherapy for childbirth.

Obstetrician Grantly Dick-Read first wrote about the use of hypnosis to reduce pain in the 1930s in his work on natural childbirth and since the 1980s a range of different techniques have been developed that utilize hypnosis in a natural childbirth.

There have been numerous studies showing that hypnosis is effective in reducing or eliminating pain during childbirth..

There have been numerous studies confirming these key findings that compared to general population figures, hypnosis and self-hypnosis during childbirth leads to:

• decreased use of pain relief medication such as gas and epidurals

• greater emotional satisfaction for mothers as a result of having their birthing partners informed, involved and supportive.

In a world of pharmacological solutions or expensive, long, yet unrewarding strategies to life’s everyday obstacles, Hypnotherapy offers a powerful, natural, real solution for all people, helping them to live a fuller more satisfying and healthy life….. Try it!